I broke my own format today with my band choice. Well, kind of. As I stated when I started this series of walking to an alphabetical list of bands, my plan was to be even more obscure than in the earlier round of alphabetical album titles. 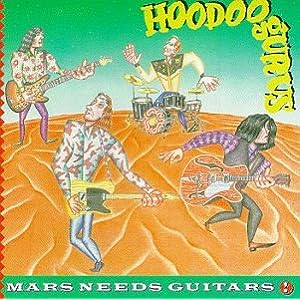 As I looked at my list of “H” bands, though, one group stood out. I tried to move on, but I was completely in the mood to wander around in the 55 degree temperatures with this fabulous band.
Today’s band is the Hoodoo Gurus, for my money the greatest band to ever come out of Australia. Yes, I know this very moment there’s a woman who wants nothing more than to bash me in the head with an empty gin bottle for not giving that award to her beloved INXS, but I stand by this claim.
Other friends will wonder how I put the ‘Gurus over The Saints and Radio Birdman. Well, those two bands certainly did create the “big bang” of Australian punk rock, but their careers were too short-lived to proclaim either the greatest ever (although The Saints did reunite in the 80’s for a couple of good albums).
There’s also the legacy of AC/DC, but their standing on my list ended when original singer Bon Scott neglected to turn his head to the side when he drunkenly passed out on that fateful evening in 1980. He was replaced by what always appeared to me to be a cab driver, and they’ve just made the same album over and over ever since.
What about Nick Cave? While he is Australian, and his original band, The Birthday Party, were THE great Australian post-punk band, he formed the Bad Seeds after relocating to London. I’ve always thought of him as a British act, regardless of his original home.
Ok, enough of this. I could go on and on justifying my choice and listing other deserving acts, but let’s get on with the Hoodoo Gurus story. Singer/guitarist Dave Faulkner and drummer James Baker came from the late 70’s band The Victims, and were joined in this new band by Scientists guitarist Roddy Radaij. The first couple of years featured no bassist and three guitarists, until the lineup was solidified with ex-Fun Things guitarist Brad Shepherd and The Hitmen bassist Clyde Bramley.
After obtaining a record deal, the band went on a great run of fabulous albums. Stoneage Romeos, their debut, is a classic, but Mars Needs Guitars and Blow Your Cool aren’t far behind (plus many other great records over the years). My pick today was Mars Needs Guitars, mainly because of my desire to hear tracks such as “Bittersweet”, the garage-y raveup “Like, Wow - Wipeout”, and the bonus cover of the Flaming Groovies’ “Teenage Head”.
I actually should hold a grudge against this band, though, as they are probably the band that has caused the constant ringing in my ears. Their 1991 release, Kinky, which was highlighted by the pure power pop sound of “Miss Freelove 69” was their most straightforward rock album to date. When their subsequent tour was scheduled to hit Omaha, I immediately bought tickets.
Our seats couldn’t have been better...at least in the short term. The show was booked in a theater, and we had the first row in the center section, which was behind a small orchestra pit. Unfortunately for me, the band’s massive PA setup featured both towers of speakers set up at an angle that pointed directly at me! With Dinosaur Jr. sound levels pounding into me, I ultimately couldn’t hear for three days and 20 years later I still have ringing in my ears. Damn you, Hoodoo Gurus! Oh well, it’s only rock and roll...and I did love the show!
Email Post
Labels: australia hoodoo gurus scott hudson walking rock alphabet