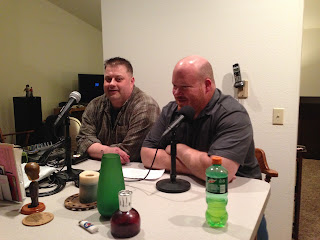 So the secret is now out. I am going to be doing some freelance music writing for the Argus Leader. It's been quite a few years since I've been a "real" writer, so I'm nervous AND excited about this new development.
My first assignment? To interview my friends in Janitor Bob, who will be playing at the Convention Center in Sioux Falls on New Year's Eve. Yesterday (December 27), the article was published, and tonight two members of the band, Martin Dill and Pat McIntyre, returned to The Ledge studios for a full-length interview. They even brought a few extremely rare practice and live recordings, which peppered their hour-long appearance.
Inspired by the prospects of having some locals on the show, the rest of the broadcast featured nothing but Sioux Falls music. Commencing with the legendary Myron Lee, we traveled through the various bands hosted by Rich Show and Dave Scarbrough, and even included a band that featured two Live Ledge chat regulars. Some time in the near future I want to do a full-length history of Sioux Falls rock and roll.
Oh yeah, to close the show there's a very special rare track from what is arguably the biggest concert in Sioux Falls history.
A special thanks to Martin and Pat for wasting their time hanging out on this dumb little show, which you can find in iTunes, Stitcher, or on The Ledge android/iPhone app. Or, you can...

Unknown said…
I knew I had heard of these guys when I heard them on your show. Did a little searching and saw this

Then it all clicked. I recognized that cover. I know I actually have the album stashed away in a box in a storage unit. I must have seen them some where in the mid 80's, probably vermillion and actually bought the album at their show.