I’m back, bitches! I’m sure every single one of you that looks at these posts (which I’m sure has yet to hit double digits) assumed that fatty pig fatty Scott gave up on this little project.
Nope. You see it is December. In South Dakota. Sane people go into hibernation around Thanksgiving, and don’t see the sun until March.
Sure, it’s been an extremely mild fall, with temps that actually hit 70 on Thanksgiving weekend. Those days are gone, though. In fact, my week away from the mean streets of southeast Sioux Falls, SD, is due to a devastating storm full of snow, strong winds, and temps that immediately froze any exposed body parts.
Ok, not really. We did get a bit of that, and I woke up two days ago to a temp of -5, but only our foolish local TV weather scaremongers would call what we had a winter storm. There’s snow on the ground and it was too cold to wander around for an hour. Plus, I’m suffering from an ear infection which has intensified the ear ringing that I blamed on the Hoodoo Gurus a few weeks ago. Trust me, it sucks to have impaired hearing (particularly last night), especially when the focus on the blog post portion of this project is the music that accompanies me. 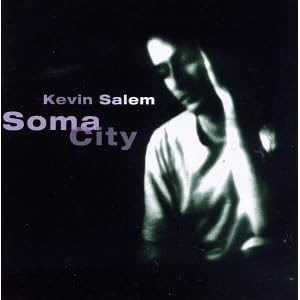 A lot of weirdness has also gone on these past few days. One unpaid gig is gone (or at the very least, reduced), and there’s now a potential for a paid freelance project. Yes, actual money for being a loudmouth music fan! More news on that when the time is right and there’s dancing in the streets.
So today the temp was 45 degrees when I got home, so I had absolutely no reason to skip. My music choice for the day actually dates back a couple of months, when singer/songwriter Matthew Ryan was my guest on Rural Ledge-ucation. One of his playlist choices was a track from Kevin Salem’s 1994 album, Soma City. As I said to Ryan on that Sunday morning, I had completely forgotten about Salem, although this album was one of my favorite albums of that year.
I first became aware of Kevin Salem as the guitarist for the last few years of Dumptruck, a great roots-y 80’s Boston band that The New Trouser Press Record Guide described as “somewhere between Joy Division and the db’s”. When that band disbanded, Salem worked with artists such as Freedy Johnston, Yo La Tengo, Marc Cohn, and many others.
Soma City was his first solo album, and it jumps out to a wonderful start with “Lighthouse Keeper”, a mid-tempo rocker with a hook so big that even Mike Tyson in his prime couldn’t avoid. With the exception of a couple of extended Neil Young-ish tracks, most of the rest of the album follows in a similar path. If there’s any comparison (outside of his buddy Freedy Johnston), Soma City is not unlike the best parts of Tommy Stinson’s catalog...even in his vocal style.
It’s always nice to reacquaint yourself with an old favorite, and today was no exception. I’m definitely not going to go years without listening to this again, and I plan on adding his subsequent albums to my playlist. Oh yeah, after years seemingly away from the music biz, I also noticed that he is the producer of the latest album by former Soul Coughing singer Mike Doughty.
Email Post
Labels: kevin salem scott hudson walking rock alphabet

grudznick said…
I root for you sir and even sometimes listen to a little bit of your music clips. I fear you are expanding my envelope box despite your oddball political leanings.
10:24 PM