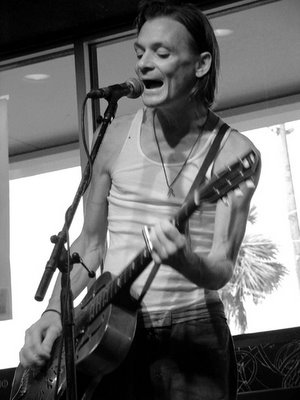 Katie Hasty, N.Y.
Singer/songwriter Chris Whitley died Sunday (Nov. 20) at the age of 45 after battling lung cancer. The veteran Texas-reared artist recorded for Columbia, ATO and, most recently, Messenger Records, which released his eleventh album, "Soft Dangerous Shores," in July. A new release, "Reiter In," is due in mid-December on vinyl and will appear on CD sometime next year.

Whitley is survived by his daughter Trixie, his brother Dan and his girlfriend Susanne, whom he was planning to marry. "I hope you all will mourn my brother's death but more important celebrate his life as Chris was all about life and living," Dan wrote on Chris' official Web site. "I started the celebration by cranking up [the 1998 album] 'Dirt Floor' in his honor ... crying still."

"Chris is an example of one of those things that appalls me about the record industry - ATO co-founder Dave Matthews told Billboard in 2001. "That is, how could a talent like his go relatively unnoticed? So few singers have their own personality, and Chris is his own man to the bone. Honestly, I feel more passion for his music than I do for my own. My music I'm critical of. But I have a fervent, religious devotion to the magic that Chris makes."

"What I came to terms with by making some small indie records and meeting other people who work in that way is that, hey, if a record doesn't do blockbuster numbers, then that's OK," Whitley told Billboard in 2001. "I feel more comfortable with my place in the culture now and the fact that I don't have to fear the cool police or this cult of youth."
Email Post