My son, the stylish rock star! 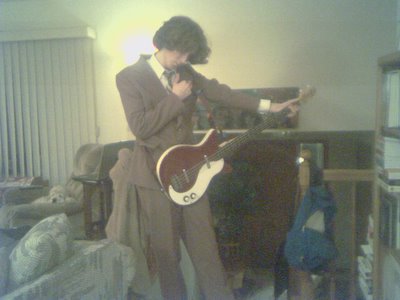 Believe it or not, there are special occasions where I put aside my sarcastic attitude and think nothing but positive thoughts. Ok, maybe that only happens once or twice a year.
Guess what? This is one of those weeks. Since tomorrow is Thanksgiving, I thought it would be a great opportunity to give thanks to those who inspire me to give my all week after week.
To begin, I’d like to thank my family, including my mother, father, sisters, nephew, niece, my sister’s baby-daddy and his crazy family, and all of my uncles, aunts, and cousins. Obviously, I must give special props to my future rock star son Alec for giving me a reason to live. But I refuse to give any thanks to my ex-wife. (Quit booing; I’m kidding.)
And I also need to give it up to the few friends that I have, particularly Pat, who provides me with quite a few of the one-liners that some of you laugh at every week, and the beautiful and talented Traci and Deanna. There’s also my good buddies at Black Sheep Coffee, Ernie November’s, Best Buy, Top Hat, Barnes and Noble, Zandbroz, and every other place that I stumble in and out of.
There’s also the people that I have met through my association with this radio station. Mad props go out to Cade, Kris, Jen, Holly, and all of the hot ad reps that I see wandering the halls every week. I also should acknowledge the listeners who have come up to me at various events such as the bikini contest two weeks ago. All of them, even the ones who disagree with my rants, have been nothing but nice.
I should probably also include a few of my music heroes – the Beatles, Stones, Who, Kinks, Chuck Berry, Dylan, Otis, Neil, Clash, Pistols, Iggy, Ramones, R.E.M., Wilco, Pixies, and, of course, Paul Westerberg and the Replacements. And there’s my favorite movie stars – Scarlett Johanson, Charlize Theron, Jenna Jameson, Tera Patrick, Teagan Presley, Taylor Rain, Janine, Ginger Lynn, and whichever other babe helps me fall asleep at night.
More heroes – Stern, Imus, Opie & Anthony, Franken, Larry, Moe, Curly (but not Shemp), Springer, Maury, Earl, Larry David, Jon Stewart, Tony Kornheiser, Seymore Butts, Ron Jeremy, Beavis, Butthead, the casts of the WWE, Family Guy, and Arrested Development, George Carlin, Jimmy Norton, and Lewis Black.
Most of all, however, I must thank the people who week after week provide me with the material for this little segment. Obviously, I must single out KELO, whose daily operations are ripe for satire and criticism. Seriously, I could come up with material on a weekly basis that go after Kennecke, Jorgenson, Cable-boy, Jodi Schwann’s unmovable mouth, the west river “Gay-tive American” reporter, and the dozens of interns who are moved in and out of here every few weeks.
Yet there are so many more victims out there that I must thank. Where would I be without “Golden Boy” Thune, “W” and his entire family of war criminals, “Go ‘f’ yourself” Cheney, their pals at facts-challenged Fox News, Mayor Dave (budget, what budget?) Munson, Dan Nelson (both of them), most of our city council, our city’s traffic lights, the Abstinence Clearinghouse people, Iowa and Lincoln County drivers, and, of course, the fine folks that make out our school board.
I realize that I’ve left out quite a few important inspirations, but they can all be acknowledged at another time. For now, I would just like to say “Happy Thanksgiving” to everybody, including not only my friends but my foes. Pig out, friends, and have a drink (or ten) on me this weekend.
Email Post

Anonymous said…
I wish FOX would quit fucking around and put Arrested Development back on or cancel it and let some other network (HBO, please!) pick it up.
3:24 PM