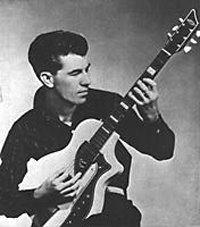 "I was looking for something that Chet Atkins wasn't doing, that all the jazz kings wasn't doing, that all the country pickers wasn't doing. I was looking for my own sound," Link Wray told the AP in 2002, about his highly inspirational musical inventions – the power chord and the fuzz tone. Wray was 76 when he died of unspecified causes at his home in Copenhagen in early November. He is credited with pioneering heavy metal and punk with his seminal late '50s- early '60s instrumentals, "Rumble," "Rawhide," and "Jack the Ripper." "if it hadn't been for Link Wray and 'Rumble,'" said Pete Townshend in liner notes on a Link Wray album, "I would have never picked up a guitar."' Bob Dylan, David Bowie, Bruce Springsteen, Neil Young, and a slew of other musicians, admit to having been inspired by Wray. The power chord is a thundering sound created by playing fifths – two notes five notes apart, often with the lower note doubled an octave above.

When recording "Rumble," he created the fuzz tone by punching holes in his amplifiers to produce a dark, grumbling sound. It took off instantly, but it was banned by some deejays in big cities for seeming to suggest teen violence.
Email Post