I’m back, bitches! I’m sure the handful of you that bother reading these self-indulgent ramblings of an out of shape hack assumed that I had decided the couch was more important than a bit of exercise.
Ok, maybe you’re not far off. Wait, no you’re not! Here’s the deal. This has been the worst spring that I can ever remember! It’s rained almost every single day since early April. And if it didn’t rain, it snowed! That doesn’t make it easy for a load like me to be hitting the streets! 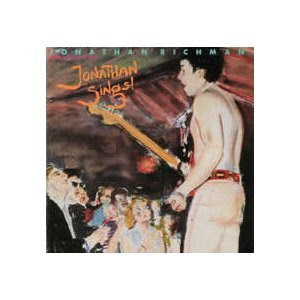 Sure, there was a day or two that I could have made it out, but those were days that I had a short porch of time either due to my podcasts or writing assignments. After a full weekend of non-stop rain, though, today couldn’t have been any more perfect. My phone says it’s 73 out, but on my ride home my vehicle said it was over 80. Nothing could stop me from lacing the walking shoes!
The question, though, is what should I listen to on this journey. I had quite a few to choose from, and I almost chose The Gift, the final album by The Jam. Ultimately, I went with Jonathan Richman’s 1983 release, Jonathan Sings. My main reason for this choice came about a couple of weeks ago when I did a Live Ledge broadcast of nothing but songs from that year. I had almost forgotten about this album, and with an opening track called “That Summer Feeling”, it was a natural choice.
Jonathan Sings is an interesting album as it marked a change in Richman’s sound. His previous albums under the Modern Lovers name (or Jonathan Richman and the Modern Lovers) were noteworthy for their influence on punk rock, and also for the fact that the Modern Lovers included future members of the Cars and Talking Heads. Their 1972 debut album included the classic, “Roadrunner”, which, besides a furious Sex Pistols cover a few years later, is now being considered as the official state song of Massachusetts.
While latter Modern Lovers recordings hinted at Richman’s desire for a quieter pace, few expected what we got on Jonathan Sings. Always an awkward presence on vocals, this album is actually perfectly titled as Richman repositioned himself as a crooner. An odd crooner, to be fair, but the perfect voice for his whimsical, sometimes humorous lyrics. The call and response interplay between him and his backup vocalists (Ellie Marshall and Beth Harrington) are almost heartwarming, and the minimal musical backing completely enhances Richman’s vocals.


Sure, this isn’t a classic album by any means, but it is an album any Richman fan should own. Beyond that, it was a perfect record to use as my soundtrack for this warm, late spring day, and a perfect complement to that wonderful aroma of freshly cut grass. Now let’s keep up this kind of weather, so these walks can actually make a difference!
Email Post
Labels: jonathan richman jonathan sings scott hudson walking rock alphabet