Nobody can say I’m not devoted to this project. Sure, I’ve missed quite a few days lately, but I already went over that yesterday. Rain, rain, and more rain is the main culprit, along with other obligations on some of those rare nice days.
Today, it is over ninety degrees, with a matching humidity, and what was the first thing I did when I got home from work? Changed clothes and headed back out the door. This was obviously not an easy day, but I trudged through a slightly different (and longer) route than yesterday. 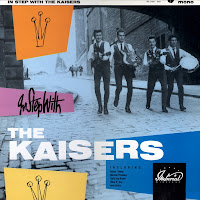 What was today’s soundtrack? I had some difficulty making my choice. Sure, I could have picked one of around forty Kinks releases, but that was too easy. Few other artists looked inviting, so I settled on a recent blog find, the second album by The Kaisers, 1994’s In Step With the Kaisers.
You may recall a few weeks ago, I pulled out a shockingly underrated band called the Downliners Sect, contemporaries of the Stones and Pretty Things that for whatever reason never captured the public’s attention. Today was a similar pick, but in this case it’s not the primitive r&b of the Stones that is emulated.
Instead, The Kaisers are beat band purists who make the early Beatles sound like a chamber group. In fact, if the pre-Love Me Do Hamburg/Cavern Club-era Beatles were ever properly recorded, they would sound like The Kaisers. Simply put, take those BBC recordings of the Fab Four’s early days, speed them up just a tad (or two), and crank the volume. That is The Kaisers.
Oh wait, I forgot to mention one important piece of information on this band. While the Downliners actually played the same clubs as the Stones, The Kaisers didn’t. There’s a good reason for that, as this is a 90’s Scottish band.
Seriously, without the assistance of websites and wikipedia, The Kaisers could indeed create a Klaatu-ish backstory that nobody could possibly prove wrong. They have the sound down. They have the intensity. They even have the one-take, live in the studio feel that was set aside by the time of Rubber Soul.


In Step With The Kaisers is almost all covers, but there’s not a track on here that doesn’t stand proud with the originals, or best known cover versions. In fact, their version of “Walking the Dog” does beat the Stones version. Maybe they’re not breaking any new ground here, but this was a fantastic motivator for a day I ended up covered from head to toe with sweat.
Email Post
Labels: kaisers scott hudson walking rock alphabet