Another hot day; another semi-devoted walker. Despite the humidity, this was the day to move beyond what I’ve previously accomplished. While partly due to the weather, so far I haven’t made it past albums that are 35 or so minutes long. I’m in a rut. 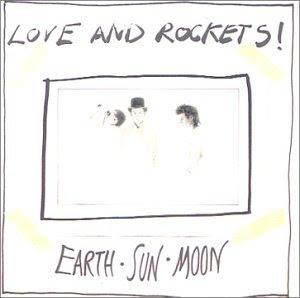 So today I picked a record that was a bit longer. Sure, 51 minutes is no Zen Arcade, but it’s still 30% or more of a workout than I’ve previously accomplished this spring. The disc of choice? 1987’s Earth Sun Moon by Love and Rockets. Yes, this is a bit of a surprising choice, but it’s also a disc I haven’t heard in years.
I know I used to own it, but at some point it disappeared from my collection. Maybe it was part of the divorce settlement way back in the early 90’s, or maybe it ended up in somebody’s jacket after a party. All I know is that at one point a good friend wanted to hear it and it was nowhere to be found.
What prompted the return of his album to my archives was the release last month of a remastered box set consisting of their first four albums, along with a fifth disc of rarities. If you’re not familiar with the band, they were originally 3/4 of the members of goth pioneers Bauhaus. After breaking up in 1983, guitarist Daniel Ash formed Tones on Tail, which drummer Kevin Haskins joined a year later. Meanwhile, bassist David J was attempting a solo career.
At one point, it was decided that Bauhaus should reform, but singer Peter Murphy didn’t show up for the initial rehearsal. The other three elected to carry on, but under the Love and Rockets name.
Ironically, Love and Rockets were a much bigger commercial success than Bauhaus, although nobody would consider their artistic influence nearly as great. While the second album, Express, was the first move to a more radio-friendly sound, it was Earth Sun Moon that solidified their pop sensibilities.
Most of the success of this record is due to a more acoustic approach. There were still some elements of their spooky Bauhaus quirks, but songs like “Welcome Tomorrow” and “No New Tale To Tell” were perfect college radio complements to the jangle pop of R.E.M. and their various clones.
Overall, it was a nice trip down memory lane, not unlike what I feel when I pull out those old Guadalcanal Diary or House of Love albums. Nothing groundbreaking; just enjoyable, catchy alt-rock.