Q is a lonely letter. It’s easily the loneliest letter of the alphabet, especially when it comes to band names that I’d consider to endure. I’m no fan of Queen or Queensryche, nor was in the mood for The Queers. The new Queens of the Stoneage was a possibility, and I almost went for The Quadrajets before dismissing it due to the deluge of garage-rock I’ve used in recent weeks. 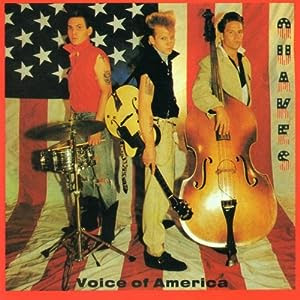 Instead, I settled on Voice of America by The Quakes, a latter day psychobilly band. What’s psychobilly, you ask? The easiest description would be to say it’s The Stray Cats played at 45 instead of 33 1/3.
That’s too easy of a description, though. It’s a hybrid genre of sorts, primarily combining punk rock and rockabilly. Probably the best description comes from About.com - “tak[ing] the traditional countrified rock style known as rockabilly, ramp[ing] up its speed to a sweaty pace, and combin[ing] it with punk rock and imagery lifted from horror films and late-night sci-fi schlock,...[creating a] gritty honky tonk punk rock.” Sound fun, right?
I’ll admit I was late to the party with this genre, until my buddy Greg Lonesome and his wonderful Rock ‘n’ Roll Manifesto show introduced me to bands like The Meteors, Sharks, Guana Batz, and so many others. In fact, The Meteors are to his musical background as The Replacements are too mine.
The Quakes are a latter day part of this scene, having formed in Buffalo in 1986. Unsatisfied with this country’s psychobilly scene, they relocated to Britian, where they eventually (and after multiple tries) signed to Nervous Records. Voice of America was their second release, and quite honestly was my choice simply because it includes a cover of “Paint It Black”.


Unfortunately for me, the Stones cover suffered from a clearly-overdubbed electronic drum sound that dominated the track. Luckily, it’s one of the few missteps of this release, as the rest of it is prime high-speed rockabilly. With today’s weather conditions even worse than yesterday (90 degrees!), this was the perfect record to push me to not take the easy way out when I landed just a half-block away from my home. Beverly was almost pleased today. The key word is “almost”.
Email Post
Labels: psychobilly quakes scott hudson walking rock alphabet