I’m sure at least one or two of you noticed that today’s letter is a repeat. That’s against the rules!!! I have a very good reason to remain with the letter “L”.
Obviously, the news of the reunion of The Replacements has turned me into an obsessive fool. My soundtrack for this entire week has been little but their catalog, and shortly before I went for today’s walk I remembered an obscurity in Paul Westerberg’s post-mats career. 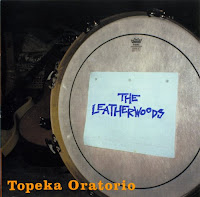 Sometime in 1992, Medium Cool Records, a subsidiary of Twin Tone, released an album by The Leatherwoods. Entitled Topeka Oratorio, it took just a few seconds to realize that a certain guitarist/songwriter was involved with the record.
A quick glance at the album’s credits show a person by the name Pablo Louserama contributing guitar, bass, keyboards, and two co-writes. Could that possibly be a pseudonym for Paul Westerberg?
It came out a few months later that it was indeed Westerberg, and there’s a good chance he had more to do with the album than advertised. There is something about the song arrangements, the mid-tempo pace, and so much more that makes it sound like an undiscovered Westerberg solo album.
Yet that may be giving him too much credit (as I am prone to do), as The Leatherwoods is indeed a real band that includes future Jayhawks drummer Tim O’Reagan and songwriter Todd Newman. Both accomplished songwriters, together they have created on Topeka Oratorio a folk-ish power pop sound not unlike the db’s, Tommy Keene, and many others.


Another interesting fact about this album - while physical copies are out of print, this album, like many other old Twin Tone/Medium Cool releases, are available via the Twin Tone website (burned copy) or iTunes.
Email Post
Labels: leatherwoods paul westerberg Replacements scott hudson twin tone walking rock alphabet