After a couple of days, I’m back out on the road today. I don’t have a lot of time, thanks to articles on multiple sites, but it’s a perfect day out. The temp is in the mid-70’s, there’s no humidity, and just a slight cooling breeze. It’s the easiest walk this summer! 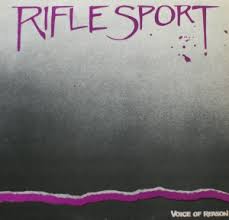 Today’s music selection is a band that should get much more attention than they’ve received over the years. Rifle Sport, who were around in the early 80’s, had the misfortune to be in a city that already had bands like Husker Du, The Replacements, The Suburbs, and so many more. Their post-punk sounds were clearly influenced by Devo, albeit with a big heavier of a sound.
Voice of Reason, today’s choice, was released on Reflex Records, the label that Husker Du created to put out their own early releases. The Devo influence is much more apparent than on later releases, and it was a great soundtrack for today’s adventure. I was so influenced by the weather that I actually moved on to another release in the “R” section, the Songs For Slim reunion of The Replacements.
Email Post
Labels: rifle sport scott walking alphabet

Anonymous said…
This Rifle Sport group sounds rather interesting and I am poking around the internet looking for a taste. I have heard of the DEVO people and find them disturbingly interesting so maybe these fellows would be similar. I imagine it was a good record to listen to on your "R" walk, Mr. Hudson.
6:14 PM