A few weeks ago, I finally broke down and subscribed to Spotify. I didn’t really want to do this, as I’m not much of a playlist person and I (obviously) have a pretty substantial library.
I was kind of forced into it, though, when one of my favorite apps was shut down a few months ago. Audiogalaxy was an app that allowed me remote access to my entire music library. It was one of the few apps that was close to perfection, and I have yet to find one that works quite as well. Sure, there are other apps that are supposed to do the same thing, but they’re all pretty buggy, cumbersome, or they don’t “scrob” to Last.FM.
Subscribing to Spotify is sort of my response to this issue, and will be used more often on my walks as we’re now hitting some of those letters that have few acts to choose from. It will be especially difficult because of how I sync music on to my devices.
My iPad works as a new release device, with 40 gigs of the newest albums on it at any given time. The iPhone is set to a somewhat similar yet kind of opposite playlist - 40 gigs of the most recent additions to my library that is NOT from the current year. While 80 gigs between the two devices is certainly a substantial number of tracks, it’s still not enough for a freak like me!
So Spotify it is, but it’s not without frustration. My main complaint is the search function. When I’m choosing my album of the day from my device’s libraries, it’s a matter of looking at the alphabetical list.
You can’t do that on Spotify! Go ahead - type in one letter for a search. You get every single title that includes that letter somewhere in the name! You also can’t fine-tune the search to specific genres, so every awful pop, bubblegum country, and EDMT releases are included in this unusable list.
Which brings us to today’s walk. After seeing there was nothing satisfactory in the “N” section of my iPhone, I used wikipedia to find a list of every artist whose name begins with that letter. Wait, wiki can do this but Spotify can’t? 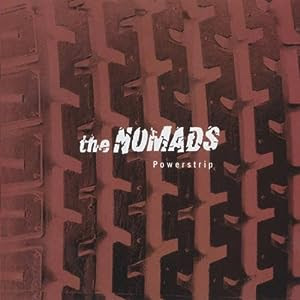 I decided to go with one of the most underrated bands from a country that never gets enough credit for their pure rock and roll. Actually, there’s a whole area that needs some notice - Scandinavia. In fact, I should do a Ledge episode soon featuring nothing but bands from this portion of Europe.
The Nomads are quite possibly the best of the bunch. The Swedish garage punkers got their start in 1981, and have never let the pedal down in their 32-year existence. All you have to do is look at the covers they have released as B-sides over the years to understand their brilliance - Dictators, Wipers, Sonics, Saints, Damned, Link Wray, Ramones, Kinks, MC5, and so many more.


I actually wanted to walk to one of their singles collections that have collected many of these covers, but one of my little rules has been to avoid compilations. Instead, I went with 1994’s Powerstrip. I guess the once criticism that can be made is that if you have one of their albums, you have them all. Why mess with a good formula, though? It was a perfect companion, especially since I appeared to have angered “Beverly” from the RunKeeper program with my slightly slower walking pace.
Email Post
Labels: audiogalaxy nomads scott hudson spotify walking rock alphabet

Anonymous said…
I like these Nomads, Mr. Hudson. Thank you for the walk I envisioned you taking.
7:50 PM