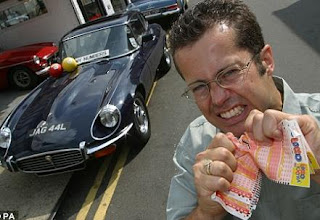 I certainly didn't intend for tonight's show to be so quiet. Generally speaking, Live Ledge is a noisy affair, full of feedback, screaming vocals, and incoherent lyrics. While there was still some of that tonight, this was for the most part the most laid-back, melodic Friday night show to date.
I probably should have figured that out when I was pulling tracks for the show. I knew that I had the banjo-led, acoustic cover of Johnny Thunders' "Born to Lose" in the set, and Jesse Malin's acoustic remake of The Pogues. And I just had to open with Camper Van Beethoven's "When I Win the Lottery" after my world travels were tragically taken away by faulty numbers on this week's lottery tickets.
When it's a new release show, though, you're stuck with the sounds of your most recent acquisitions. Tonight featured new music by Bad Brains, Guided By Voices, Cheater Slicks, and so many more, plus new blog finds of Chris Spedding, Jesse Hector, and quite a few others. Also, great weather created many walking excursions, so there are two sets that sample tracks from my "Walking Rock Alphabet" blog series.
It's a fun show, actually, despite the calmness of the selections, so pull it from iTunes or Stitcher, or...