Another day that could have been easy to skip, but all of the reasons I could conjure up were actually why I NEEDED to get out today. It was a shitty day all around - professionally, personally, emotionally. What could go wrong certainly did, plus it was a day of self-serving assholes babbling about politics. I had to somehow burn off that negative energy.
Yet this was not an easy day to get outside. For one thing, while the temperature was pretty mild, it was also a day of strong, cold winds. Perfect, I guess, for a day full of blowhards. 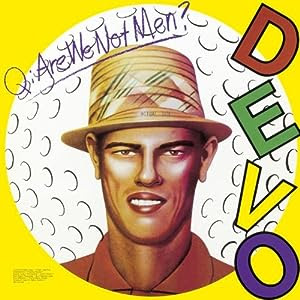 There was also the fact that I am now at the worst letter of the alphabet - “Q”. There’s not much to choose from, and my buddy Jason already used the obvious pick of The Queen is Dead by The Smiths. And, as he noted, there’s no way I’d be able to make a sizable dent in The Who’s double-disc rock opera Quadrophenia.
By default, today’s album is Q: Are We Not Men? A: We Are Devo! It ended up being the perfect album, as my glimpse of that album reminded me of my introduction to the band. It was Saturday Night Live in 1978, and I had not even heard of the band. Here was this goofy band in yellow outfits with what looked like beehives on their head playing a “Devo-constructed” version of the Stones’ “Satisfaction”. What the fuck was this?
Time for a rant that has little to do with today’s selection. Saturday Night Live used to be a great outlet to discover new music, as the show seemed to book the bands that the cast enjoyed instead of what the record industry wanted to showcase. It was such a wide mix of artists. You’d have obscurities like Devo one week, and then the next would be a household name like the Stones.
Now it’s just a mess, as the show’s idea of diversity is to have a lip-synching dance-pop twit one week followed by some godawful preppy-dressed fake alt-rock the next. Nobody should be forced to endure a “band” like Fun, who was last week’s guest on the disappointing Louis CK episode.
Back to Devo, and today’s walking music. I hadn’t listened to the full album in years, although various tracks have been on Ledge episodes. First off, I was shocked at how guitar-driven this album is. The stereotype of the band is synthesizers; close to post-punk three years before the term and movement was created.
Instead, this album actually rocks on most of the tracks, particularly “Uncontrollable Urge”, “Mongoloid”, and so many others. Yet, one still must be amazed at the courage of Mark Mothersbaugh and the rest of the band. Devo didn’t come from New York. Or Los Angeles. Or London. No, they were from Middle America - Akron, Ohio to be exact...and they formed long before the advent of punk and/or art rock. I can only imagine the situations they found themselves in throughout not only those early years but up to their first national and international tours.
What a career, though. Early fans included David Bowie and Iggy Pop. They collaborated with Neil Young on his obscure Human Highway movie (and isnpired Neil’s classic “My My, Hey Hey”). They were groundbreaking video stars in the early days of MTV, and leader Mark Mothersbaugh has been the go-to guy for not only feature film soundtracks but most of the early Nickelodeon cartoon programming such as Rugrats and Bearkman’s World.
Ok, enough of the history lesson. The walk was cold, but the mood has improved. Hopefully, I can now rebuild some bridges. Wish me luck.
Email Post
Labels: devo scott hudson snl walking rock alphabet