I’m not going to waste your time with some cutesy little into tonight. It’s been one of those weeks that you just want to get over with and forget. I’m in no mood to deal with much of anything, so when I finally got home tonight I just bundled up and got on with it.
As John Lydon once sang, though, “anger is an energy”, and I proved it tonight. Not only did I get through an entire album, I almost made it through an entire discography! Don’t be too impressed, as the band in question only has two releases, and one of them was a posthumous album of outtakes and demos. 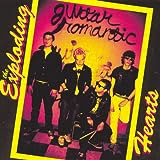 What band am I talking about? The Exploding Hearts, who in my mind was well on their way to ruling the world before tragedy struck them in mid-2003. I may have used this phrase a few times before, but they’re pure Scott music. Take a handful of my favorite original British punk bands such as The Undertones and The Only Ones, and mix in some of the late 70’s power pop-ish punk of The Real Kids, Dead Boys, and The Nerves. Top all of this off with a fire-y guitar sound that clearly has the ghosts of Bob Stinson and Johnny Thunders raising whiskey toasts and grinning.
The Exploding Hearts were a Portland band whose debut album, Guitar Romantic, was initially released in early 2003 on a tiny record label, Screaming Apple Records. The initial vinyl run was only 1000 copies, but as the band began receiving rave reviews, Dirtnap Records, a subsidiary of Mordam Records, picked up the CD rights and released it on March 24, 2003.
Four months later, as the band was returning home from a gig in San Francisco, their tour van crashed near Eugene, OR. Three members of the band, bassist Matt Fitzgerald (was was driving and reportedly fell asleep), vocalist/guitarist Adam Cox, and drummer Jeremy Gage, all died as a result of the accident, leaving guitarist Terry Six as the lone survivor. 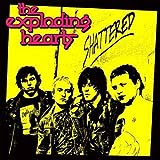 While all deaths are a shame, this one hits hard because of the band’s great potential. Guitar Romantic is an underrated rock ‘n’ roll classic. In a decade of Pro Tools, American Idol, and so many other sins against music, The Exploding Hearts were a reminder that rock ‘n’ roll can and should still exist; that a loud guitar mixed with a driving rhythm section is not a dying relic.
Surprisingly, the odds and ends posthumous collection, Shattered, is not the usual scraping of the bottom of the barrel that plague most of these releases. In fact, I initially didn’t notice we had moved on to their other album as I was wandering around the neighborhood. I guess it should all fit together, though, as a good percentage of this package consists of non-album singles tracks, along with a handful of demos of songs that probably would have ended up on a second album.
The bad news is that I may have overextended myself on this long walk, as my legs are fucking killing me right now!!! Ugh, another faildozer on a day...make it week of disappointments.
Oh, and GET WELL KILLER!!!
Email Post
Labels: exploding hearts guitar romantic scott hudson walking rock alphabet