The Walking Rock Alphabet: U

As I babbled on my last couple of posts, yesterday marked the day that the future prospects of this project dimmed almost as much as the late afternoon daylight. Instead of walking in temps above my age, I’m waking up to temps in the teens and highs in the 20’s. 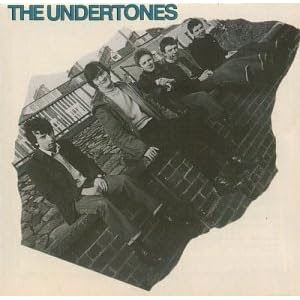 Yet here I am outdoors today. Part of this was simply due to my high caloric intake of whiskey-cokes, chips, and chili that I inhaled during a fun afternoon of football at my buddy Craig’s home.
There’s another reason, though, that I pulled on a sweatshirt, winter coat, and gloves...and STILL froze my ass off! My choice in the “U” section was one of my easiest of this entire exercise program - The Undertones.
Why The Undertones? Well...besides the fact that their combo of first generation punk intensity, 70’s glam, and 60’s garage-rock basically created the pop-punk template that is still utilized 35 years later, Feargal Sharkey and his cohorts are easily the greatest thing to ever come out of Ireland.
Did you hear me, my friends. The GREATEST thing to ever come out of Ireland. Better than U2? Duh. Better than the Pogues? Ok, that’s a bit closer. You can keep your Van Morrison (as much as I like him) or your Cranberries (please, keep them away from me), but even if The Undertones never recorded anything other than one particular song they’d still top my list.
What song am I talking about??? “Teenage Kicks”, which in my eyes is one of the top five greatest songs ever recorded...

AND I WANT THIS SONG IN MY JUKEBOX!!!

Please, my friends, if you want to make a chubby old man happy than you’ll find me a 45 of this song. I’ll love you. I’ll admire you. I’ll get on my knees and praise you. I’ll even reimburse you. I have a spot in my jukebox waiting for this track. Please, please, please, let me get what I want!
What’s surprising, though, is that I really don’t have a story about how I discovered the song, the band, or this album. There’s no defining moment that will bore you all. Hell, it’s also one of the few tracks that I didn’t discover around the time of its release. At some point I heard it, and every time afterwards I loved it more and more.
Look, rock ‘n’ roll is supposed to be all about teen angst...even if I barely remember what that is. It’s supposed to be led by simple guitar chords played by a guitarist who lives on amphetamines. It’s supposed to have a sugary hook that refuses to leave your head. This song has it all. The lyrics are simple and direct, but say all that needs to be said:

Are teenage dreams so hard to beat
Everytime she walks down the street
Another girl in the neighbourhood
Wish she was mine, she looks so good

I'm gonna call her on the telephone
Have her over cos i'm all alone
I need exitement oh i need it bad
And its the best, i've ever had

It’s 2:27 of heaven, but that’s not the only song on this album. “Family Entertainment”, “Girls Don’t Like It”, “Jimmy Jimmy”...the list goes on and on. Even the reminder of sunnier days that is “Here Comes the Summer” couldn’t detract me from the genius of this album. While I was freezing my ass off on this walk, I was so into the tunes that I went a few blocks longer than the length of the album!
Email Post
Labels: 45 jukebox scott hudson teenage kicks undertones walking rock alphabet