Throughout this project, I’ve tried really hard to avoid the predictable album choices...particularly from one certain band. I skipped All Shook Down, Don’t Tell A Soul, Hootenanny, and Let It Be. Yes, I did select Paul Westerberg’s Folker, but not Tommy Stinson’s excellent Bash and Pop release.
Today, though, I said fuck it. I’m in a shitty mood, the early NFL lineup stinks, and other issues have been playing with my mental state. Oh yeah, and there’s currently a light drizzle. If I’m heading outside, then it’s going to be accompanied by one of my favorite albums of all time.
But I really didn’t HAVE to make the obvious pick, as the letter “P” has plenty to choose from. Since I’ve already walked to Cramps and Ramones album, Psychedelic Jungle and Pleasant Dreams were easy to vote against. Debut albums by The Jesus and Mary Chain (Psychocandy) and The Plimsouls (self-titled) were tempting, as was Whiskeytown’s Pneumonia. Hell, even Purple Rain would have been a great possibility. 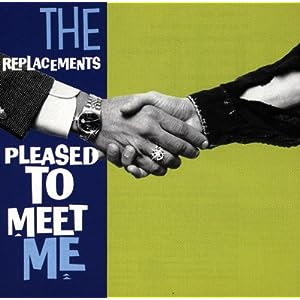 Nope, today’s easy choice was Pleased to Meet Me, the fifth full-lengthy album by The Replacements (Stink was an EP). The end of a release trio that stands up proudly with anybody else’s three-in-a-row releases, it is also the album that saw the band say goodbye not only to guitarist Bob Stinson but to punk rock itself.
That’s not to say that PTTM is a mellow album, or that there is no crunchy rock ‘n’ roll. No, this isn’t a lush pop album. That problem didn’t come about until their next album, Don’t Tell a Soul. There’s no “Fuck School” on here, though. Nor is there a “Tommy’s Got His Tonsils Out”.
You do, however, get the theme songs to both my show (“The Ledge”) and my fellow Real Punk Radio host Jerry (“Red Red Wine”), an ode to the downtown Minneapolis walkways (“Skyway”), and quite possibly Paul Westerberg’s greatest song ever, “Can’t Hardly Wait”.
I could wax poetic about this album for paragraph after paragraph, but you can find that kind of coverage all over this blog...or throughout my Ledge podcasts. Let’s just say that despite ending up a bit drenched after I returned home I didn’t feel a drop. Time had flown by as I wandered around singing along to every track. I pity my poor neighbors if they overheard me.
Email Post
Labels: pleased to meet me Replacements scott hudson walking rock alphabet