The Walking Rock Alphabet: B

I wasn’t going to make it out my door today. A long, shitty day coupled with the beginning of the holiday weekend, made me want to just lounge on my couch with a stiff whiskey-Coke, fantasizing about a lovely lady that sadly resides far, far away.
At the same time, though, there aren’t going to be many, if any, days like today, as it hit 70 degrees. That’s right, 70 fucking degrees in Sioux Falls, SD the day before Thanksgiving! There’s no excuse to not make some effort to take advantage of this warmth. Plus, maybe a brisk walk will ease the day’s frustrations. 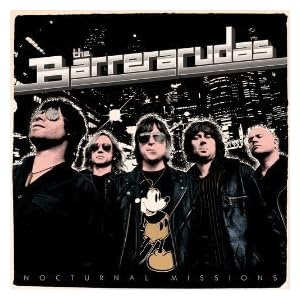 I also had the perfect record for such an adventure. Nocturnal Missions is a 2011 album that deserves to be heard. Yes, it’s received plenty of airplay on my dumb podcasts, but it should reside in every rock ‘n’ roll fan’s library.
The problem in convincing the world of this band’s awesomeness is that they’re almost impossible to describe. The Amazon description says they are “somewhere between The Heartbreakers (Petty) and The Heartbreakers (Thunders)”, but I don’t hear much of the Petty side of that equation. Sure, there’s a lot of Thunders-ish glam-influenced guitars, but I don’t quite hear the decadence that marked anything involving Johnny Thunders.
One could also say they’re punk-inspired pop music, but they’re thankfully miles away from what we know now as pop-punk. It’s melodic but not as tedious as the Fall Out Boy crowd. Again, thank God.
So here is what I think is the best description. Take the Thunders version of The Heartbreakers and add a tiny sliver of The Ramones, a big helping of revved-up Plimsouls, a couple of dabs of the pop sensibilities of Tommy Keene and Dwight Twilley, and top it off with the sugary side of early Cheap Trick (and they even cover Cheap Trick’s “Come On, Come On”). In other words, it’s Scott Music For Scott People.
Still not sold? Just go to your favorite online music resource, whether it’s Spotify, Last.FM, Pandora, or those “other” places I won’t mention here, and cue up “Baby Baby Baby”, “Don’t Roll Your Eyes”, or my favorite, “Girl”. I almost guarantee that you’ll end up going back to obtain the rest of the album.
Fortunately for my day, but unfortunately for fans of the band, Nocturnal Missions is way too short. 29 minutes makes me just beg for more. Lots more. Hopefully, they’ll have another release soon. Please? Like next week. kthx
Email Post
Labels: barreracudas scott hudson walking rock alphabet