I did something a little different today. Bored with the limited walking options in my neighborhood, I actually did a little trot in the area that surrounds my workplace. It was a bit refreshing to see different buildings and people, although outside of the major street I had to cross it was just as quiet as my normal area. 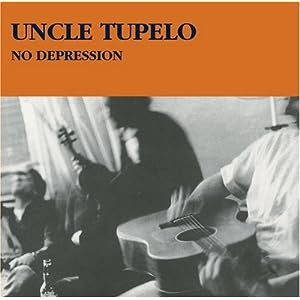 This was another day where I had plenty of options, even without opting to utilize Audiogalaxy to access my home library. My iPHone’s section for the letter “N” is full of classics, including the Sex Pistols (Never Mind the Bollocks), Husker Du (New Day Rising), Superchunk (No Pocky For Kitty), Arcade Fire (Neon Bible), and R.E.M.’s most underrated album (New Adventures in Hi-Fi).
I opted for the debut album that may be MY most influential group of the last twenty years. Formed in 1987 when the lead singer of their original band, The Primitives, quit to go to college, Uncle Tupelo consisted of Jay Farrar, Jeff Tweedy, and Mike Heidorn. Over the course of their seven-year career, their mixture of punk rock and old school country pretty much invented what is now known as alt-country, Americana, or whatever you want to call that genre.
Sure, there was a cowpunk movement in the earlier part of the 80’s, primarily the greatness of The Beat Farmers, Blasters, Green On Red, and Jason and the Scorchers. Social Distortion flirted with country styles, and X mixed rockabilly in their country/punk mix.
There was something different about what Uncle Tupelo was doing, though, particularly in their early days. While the earlier cowpunk bands primarily sounded like revved-up Byrds and Stones cover bands, Uncle Tupelo went to the roots of both punk and country. The staccato rhythms of The Minutemen loomed large in their sound, mixing with covers of The Carter Family and the Stanley Brothers.
The debut album in question, No Depression, hits you right in the head with this formula with the opening track, “Graveyard Shift”. Most of the rest of the album continues in this manner, with Farrar and Tweedy’s songs painting perfect pictures of nowhere lives in rural Mid-America, culminating with the perfection of “Whiskey Bottle”.
I’m sure NOBODY will agree with me on this, but what makes this track so great is that it shows that Nirvana wasn’t the only band perfecting the “Quiet/Loud” template. The tune commences at a languid pace with Farrar’s and acoustic guitar before the full band kicks in for the chorus...and then back to quiet. Doesn’t that sound like the template for songs such as “Come As You Are”?
Email Post
Labels: music no depression scott hudson uncle tupelo walking rock alphabet