I may have stated that I was going to skip venturing out on Turkey Day, but I found myself waking up way too early this morning. Way too fucking early. I should have just gone in for a half day of work, as attempting to force some more sleep just didn’t work.
So I stumbled out of my bedroom and made myself a pot of coffee. Turning on the TV, I quickly figured out that the holiday tradition of nothing but pure shit had not changed. I don’t waste my time with lip-synching parades, so I moved on to the cable channels.
Wait, did Showtime sell Homeland reruns to A&E? No, I guess not. It’s just Mandy Patinkin interrogating a Middle Eastern suspect on a rerun of Criminal Minds. I figured it out because instead of the experimental jazz that is usually the show’s soundtrack, instead it was the usual generic network TV “dramatic” keyboard garbage. At least that channel is showing a pre-2011 episode for a change, I guess.
With the coffee pot drained, I turned on the weather app on my iPhone and discovered that while it was currently in the high 40’s, a cold front was quickly coming in and the temps were about to go downhill. Ah, what the fuck. I may as well head outdoors. 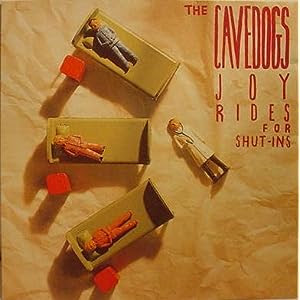 Today’s group is the early 90‘s, Boston-based The Cavedogs, and their debut album, Joyrides for Shut-ins. An apt title for my reclusive lifestyle, I’d say. I discovered this band back in the days when I was still doing college radio shows. “Tayter Country”, the first track on the album, was quite possibly my most-played track of 1990. Powered by
Mark Rivers’ Keith Moon/Clem Burke-ish powerfully exuberant drums, “Tayter Country” is one of the greatest Kinks/Cheap Trick-inspired power pop tracks I’ve ever heard.
While the rest of the record may not live up to the promise of this track, it is till full of the types of glistening guitars, pop hooks, and clever lyrics that forms the basis of the vast majority of my music empire.
Too bad the world never caught on to this great band, though, but like most tragic band stories it’s not their fault. They were signed to Enigma Records, who released this album not long before they imploded. Capitol Records, who had a joint venture with Enigma, picked them up but inner turmoil had set in during the recording of their second album, Soul Martini. After brief tours with Dramarama and The Replacements, Capitol dropped them and the band broke up.
As I made my way around the neighborhood, I couldn’t help but wonder what would have happened if their label situation hadn’t been so dreary. What would have happened if Enigma had set them up on early tours that made sense instead of forcing them to open for other Enigma acts such as Mojo Nixon or The Dead Milkmen. While they’re fine artists, they had nothing musically in common.
These thoughts helped me ignore my dismal trot. While the temperature was indeed mild, a strong Northern breeze made me freeze my ass off...enough that I pulled up my hood and put on my gloves. On the other half, with the sun in my face and the wind on my back, I sweated like a pig. I was more than happy when that last track concluded a few hundred feet from my door.
By the way, if you have any interest in The Cavedogs, you can find rarities, b-sides and live tracks at their website, Tayter Country.
Email Post
Labels: cavedogs scott hudson walking rock alphabet