Tomorrow marks a turning point in this project, as the high temp will be less than half of what it was when I made it out this afternoon. Instead of today’s mid-50’s, it won’t get any higher than 28 or so tomorrow.
I honestly don’t know how I’m going to handle this, although I only have a handful of letters left to get through. I’m assuming there will be a few semi-nice days in the next couple of weeks, but it sucks that I had over a week taken away by my kidney stones.
Oh well, I have to come up with some sort of alternative program anyway, as I’m not just going to toss aside the progress I’ve made over the last month or so. I’ll have to obtain a treadmill or elliptical bike of some type...or maybe utilize that gym that is less than a mile away. 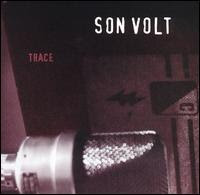 Needless to say, I just had to get out on this cloudy day, so while I would have rather taken a nap I made it out just as the sun made a cameo appearance. Today’s album took little time to select, as Son Volt’s Trace is quite possibly the greatest Americana album ever released.
I already told part of the Son Volt story a week or so ago when my album of the day was Uncle Tupelo’s No Depression, but it should be noted once again that when that band broke up it was Jay Farrar’s subsequent band that was predicted to be the most successful.
Trace seemed to give further proof to that prediction. Farrar’s blending of Crazy Horse-ish guitars and traditional country instrumentation (pedal steel, etc.) were the next step passed where Uncle Tupelo’s final album, Anodyne, left off. Songwriting-wise, Farrar really WAS a step beyond his previous standards. In fact, he was a few steps beyond, as he had written few songs as strong as tracks like “Route”, “Tear Stained Eye”, or the semi-hit “Drown”.
The classic moment of the album, though, is the opening track. “Windfall” is the type of song ANY songwriter would love to create, which is probably why Steve Earle, no slouch at that craft, immediately began covering it in concert.
There’s a lot of late-night driving songs in the annals of rock ‘n’ roll, from Chuck Berry to the Beach Boys to Bruce Springsteen, and “Windfall” sits proudly in that group. While the lyrics point to a summer setting, it’s always seemed like a fall tune to me...which made it the perfect soundtrack to this cool, fall day.
Email Post
Labels: scott hudson son volt trace walking rock alphabet