To be completely honest, I did everything I could to put off doing my duty today. I made coffee runs. I worked on updating my iTunes library. I was so bored, though, that the only entertainment I could come up with was a walk around the neighborhood. 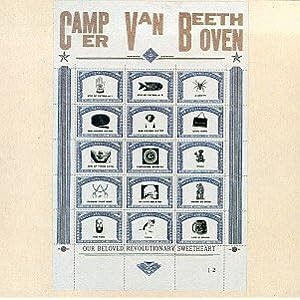 Today’s music choice was a no-brainer, partly due to the lack of choices. I’ve ignored one of my favorite 80’s bands, Camper Van Beethoven, in recent months, so playing Our Beloved Revolutionary Sweetheart was an opportunity to reacquaint myself with the band.
Before we get to that album, though, I should take a few paragraphs to explain my long, strange trip with this band. I was introduced to them a year or so after I graduated from college. I was still doing shows on KAUR, though, and as a former music director I also helped fill up empty slots by enlisting my friends.
Working as a club DJ at Nite City, the house I shared with a couple of old high school friends became the decadent post-bar hangout that guaranteed none of us will ever be able to run for public office. It was on one of those marathon late-nights that my good buddy Don threw on Camper’s first album, Telephone Free Landslide Victory.
This was years before “Take The Skinheads Bowling” became a novelty pop hit, and I had never heard anything like this mish-mash of folk-punk, Syd Barrett-era psychedelia, country-ska, and Eastern European folk music. Black Flag’s “Wasted” was turned into a country tune. “Ambiguity Song” was pure 60’s garage-pop. “The Day That Lassie Went to the Moon” was everything Pink Floyd promised but never delivered.
Not used to my friends introducing ME to new music, I asked Don where he picked up this album. “In the garbage can at KAUR”, was his response. Ugh. I had been disappointed with the new regime at the station for months. Here was proof of how incompetent they were.
I was hooked by this album, though, so it was natural that we all made it up to Minneapolis to see them at the 7th Street Entry. So did a good percentage of the area’s musicians, as the crowd was full of recognizable faces. I stood next to 2/3 of The Violent Femmes. Prince, who was playing next door at First Avenue, supposedly stepped in for a few minutes, but these tunes were too weird even for him!
It was quite the night. The band reportedly took acid just before they hit the stage, which was obvious about halfway through their performance. My buddy Don made out with the drummer’s girlfriend right behind the stage, and we drank their beer after the show.
A year or so later, the rest of the nation’s college stations caught on to the band’s magic, and the University of South Dakota actually booked them for their yearly big show. The day of that show, I received a phone call at the record store I was working and asked if we’d be interested in having them do an instore appearance. Did I? Well, duh.
The next day, the band’s van showed up at my store in the late afternoon. I had brought my video camera, so I filmed short interviews, along with footage of them wandering around the store. They played a half hour or so, culminating in violinist Jonathon Segel running around the record racks while doing his “Wasted” solo, finishing with his last note inches from my camera. What a great day.
Jump ahead almost two years, and we have today’s album, their first for a major label (Virgin Records). While it is nowhere near as lush as most major label releases at the time, the production on this album is definitely far removed from the low-budget work on their previous three albums. This album is also much more conventional than their earlier releases, or as conventional as a band can be that features a gypsy violin sound as one of their main instruments.
But while the weirdness has been tempered, Our Beloved Revolutionary Sweetheart stands proudly with the rest of their catalog. “Tania”, one of the final tracks on the album, is a wonderful fan letter to Patty “Tania” Hurst, the heiress who was kidnapped by the SLA and turned into a bank robber in the 70’s. “Eye of Fatima, Pt. 1” may be the band’s best garage-rocker, and the “Revolution #9” freak-out at the end of the conventional country-rocker “She Divines Water” shows the band was still experimenting.
Mainstream success may have never happened to this band (except for singer David Lowery’s post-Camper group, Cracker), but they will always be a band that reminds me of the great times I had in the years right after college. This album actually inspired me to walk farther and longer than I have to date. Who would have guessed that a record that fueled an unhealthy lifestyle 25 years ago would now inspire me to better health?
Email Post
Labels: camper van beethoven KAUR scott hudson walking rock alphabet