This project is becoming a bit of a race against time. The temps are dropping; the amount of daylight is disappearing (no thanks to daylight saving time). The blizzard that is currently hitting the Northeast could happen here on any day.
There is also the question of what to do once I get to the final letter. Obviously, heading back to the couch is not an option, but I’m also not going to be traipsing around town when the temp is hovering around zero. Plus, do I continue writing? How do I keep my mind interested in improving myself?
Today, I had no choice but to head outside. As the walk commenced, the temp was in the high 50’s, and with a cold front coming in this weekend I doubt that I’ll ever see that warmth again until next spring. 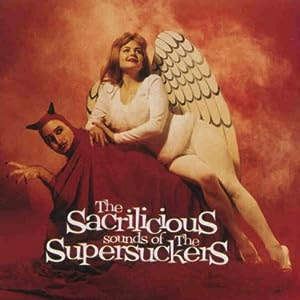 Plus, I’m at one of the letters where there is a wealth of possibilities. Almost every artist I’ve ever loved has an album that starts with “S”. In fact, quite a few have more than one. What do I choose?
After staring at my library for a few minutes, my choice could be a surprise to many people. The Sacrilicious Sounds of The Supersuckers is the third studio album of the self-proclaimed “greatest Rock ‘n’ Roll Band in the World”, an album that saw the core of Eddie Spaghetti, Dan Bolton, and Dancing Thunder joined by Didjits/Gaza Strippers guitarist Rick Sims.
If you’re not aware of The Supersuckers...well, why the fuck are you reading this? Except for their foray into country, Must’ve Been High, they’re an amphetamine-fed, metal-influenced, punk rock band whose amps are always set to the Spinal Tap cliche of eleven. They’re a white trash Stooges, singing about dope, guns, booze, and Ozzy.
They’ve also been in our fine city a few times over the years. I missed their latest foray a few months ago, but I was there when they had the unfortunate “opportunity” of opening an Arena appearance by Ministry.
No, no, no. The Supersuckers have to be seen and heard in a rock club, with those thunderous riffs bouncing off the walls. The Ministry audience hated them, but when they returned a few months later to play the Pomp Room it was a different story. And then again a couple of years later. Days before each of those Sioux Falls appearances I was able to have lengthy interview sessions with Mr. Spaghetti, and I’m dying that I don’t have digital versions of those chats.
Not only does this album live up to the “greatest r&r band” label, but it inspired me to walk the farthest I’ve made it to date. How this is possible I’m not sure, as the album is only 38 minutes long, but I made it at least six blocks farther. I guess when I giggled to myself how “Born With a Tail” was inspiring a “Staying Alive”-ish strut carried on through the whole session.
Or it could be another reason that I stepped up my pace and distance. Shortly before my work day ended came the sad news that an old friend/employee had passed away. Kim began working for the family a couple of years after my dad started our business. Two years older than me, she was a striking beauty who I absolutely idolized in my impressionable teen years
She became a drinking companion for quite a few years, and I don’t think anybody will be angry at me when I say she loved her beer. In fact, this love of the cocktail ultimately led her and her husband to purchase a bar in the 90’s. We had drifted apart over the years, but I always knew where to go if I wanted to talk to her. And I did more than a few times.
I won’t go into details, but what is sad about Kim’s death is that it could have been prevented. She will be greatly missed...even if she did love the Dallas Cowboys.
Email Post
Labels: eddie spaghetti scott hudson supersuckers walking rock alphabet