It’s a beautiful day, but I had a new distraction that almost kept me from walking. I’m sure most of you know that I write for a Big Brother blog, and also cohost a podcast devoted to the show.
Over the last year or so, I’ve expanded my viewing to foreign versions of the show, and have actually interviewed a couple of contestants from the UK series. The past few months I have invested an hour of my day to Australia’s version of the show, which came back this summer after a four year hiatus.
If you’re even the slightest fan of the American version, you really need to head to YouTube and check this version out. Simply put, it’s hugely superior. Seriously, there is no comparison. What has happened to the American Big Brother is a disgrace, and if I was in charge I’d fire everybody associated with the show.
Today was the finale of the Australian show, and I had been able to watch bits and pieces throughout the day. There are a ton of differences between the US and Australia versions, and in every category the US trails. The casting, host, rules, house layout, and pace is so much more entertaining. Even the voice of Big Brother has a personality, and the main reason for the show’s success is that everybody involved has FUN. Yes, there are still little fights, cliques, and strategy, but unlike our version (and even the UK series) I guarantee after today there won’t be tedious ongoing social media fights between various cast members. They will all look back at their time on the show as a positive part of their life.
LIke I said, I was able to get through most of it in bits and pieces today, but I decided to get on my walk as I had seen the outcome. The little bit I have left can be picked up later tonight. 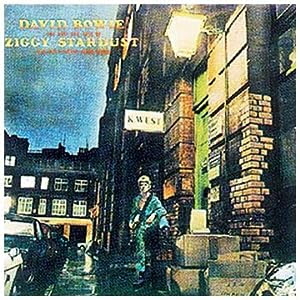 Yesterday, I probably wouldn’t have made the same decision, as the letter “Q” had so few choices. Not so today. “R” is a treasure trove of possibilities - Reckoning, Rubber Soul, Revolver, Rainy Day Music, Rattlesnakes, Raw Power, and Rocket to Russia are just a few of the available classics. I almost settled on RFTC by Rocket From the Crypt after the news that this great band is reuniting, but I settled on a different classic.
Today’s album is The Rise and Fall of Ziggy Stardust and the Spiders From Mars by David Bowie. Why? Besides the fact that I love this album, I stumbled upon Paladia showing that album’s concert movie a few days ago.
The real star of that movie isn’t Bowie, though. It’s guitarist Mick Ronson, who was years, if not decades, ahead of his time. His playing has influenced punk, metal, glam, hair bands, and every genre in between. His use of feedback rivals Townshend; his stage antics added a new sort of drama that was a perfect counterpoint to Bowie’s groundbreaking look and staging.
Ziggy Stardust is considered a rock opera, but that’s really not true as there’s no real story here (or at least not until the last few songs). Bowie, though, is playing a character here and he’s singing as that fictional Ziggy Stardust.
This is also one of those rare cases where my favorite album by an artist is their most successful. Yes, the “Berlin Trilogy” is probably Bowie’s most artistic albums, but Ziggy is the album that I can always listen to from beginning to end. The classics don’t let up. While the radio hits are at the end of the album (the title track, “Suffragette City”), it’s the first half of the album that are in my overall Bowie Top 10. “Five Years”, “Moonage Daydream”, and “Starman” would be enough to make this a legendary release, let alone side two’s “Lady Stardust” and “Hang On to Yourself”.
The movie version, which also incorporates other tunes from that era (and Bowie’s reclaiming of Mott the Hoople’s “All the Young Dudes”), and covers of the Stones (“Let’s Spend the Night Together”) and the Velvet Underground (“White Light/White Heat”), transforms the album into a real concept album. This is mainly because the show became real life drama when Bowie introduces the final song, “Rock ‘n’ Roll Suicide” by saying “not only is this the last show of the tour, but it’s the last show that we’ll ever do”. Apparently, the band was not told of this decision, and the Ziggy persona was killed off and the band fired after this show.
WIth the walk and album completed, it’s now time to go back to Big Brother Australia. Who will win? Hopefully, it’s the lovely Layla. “Oats a la  Layla!”
Email Post
Labels: bbau Big Brother david bowie scott hudson walking rock alphabet ziggy stardust