Blind Faith. CSNY. Derek & the Dominos. Traveling Wilburys. All supposed supergroups. All definite failures. Why does the sum of so many great parts never come close to equaling the individual talents. Well, in the Wilburys case just point to producer Jeff Lynne. For the rest, it’s simple - ego. You’re asking pampered millionaires who ALWAYS get their way to share not only the spotlight but the decision making. 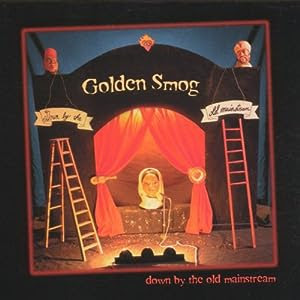 It never works...except in one case. Golden Smog began as an excuse for Minneapolis musicians to get together at bars such as the Uptown and Lee’s Liquor Lounge. Their first gig was actually under the name of “The Take it to the Limit Band”, covering primarily Eagles tracks (groan).
While the lineup was flexible, by the time they decided to make a recording it included two members of The Jayhawks (Gary Louris, Marc Perlman), Soul Asylum’s Dan Murphy, Run Westy Run’s Kraig Johnson, and Chris Mars of The Replacements. This first EP, On Golden Smog,
Three years later, the focus had shifted to originals, with Honeydogs drummer Noah Levy replacing Mars, and Wilco leader Jeff Tweedy also added to the lineup. Now this is my kind of supergroup, as I was a huge fan of every one of the original bands.
Their first full-length (and today’s walking choice), Down By the Old Mainstream, is EXACTLY what you’d expect when you combine The Jayhawks, Wilco, and the non-”Runaway Train” side of Soul Asylum. Well-crafted lyrics, played in a style that includes hints of folk, country-rock, and just a tad of Stones-y crunch.
Most importantly, there is no evidence of the ego problems that I referenced earlier. Everybody has roughly an equal amount of songs on this album, including Kraig Johnson, easily the least-known member of the band. The record also flows like this is a “real” group, not individual solo tracks that mirror the singer/writer of the tune.
Golden Smog went on to record three more albums over the years, but scheduling was a times an issue. The success of Wilco greatly reduced the availability of Tweedy; by 2006’s Another Fine Day he only had a cameo appearance. Noah Levy also dropped out early on, and was replaced by former Big Star drummer Jody Stephens.
I’ve been lucky enough to see them on numerous occasions, including an impromptu min-set midway through a Wilco appearance at First Avenue. Of course, my favorite moment was seeing them front Paul Westerberg for a spirited rendition of the Stones’ “Dead Flowers” at the benefit for Soul Asylum bassist Karl Mueller in 2004.
Email Post
Labels: golden smog jayhawks scott hudson walking rock alphabet Wilco