Today marks an end of an era, sort of. After this letter, I won’t have much of a choice for the last trio of selections. While I had plenty to choose from today, though, there really was no deliberating needed. Instead of albums by the likes of Husker Du, Patti Smith, The Who, and White Stripes, there really was no doubt what would accompany me out on this calm, warm November afternoon.
Before I get to that, though, let me explain how I discovered this band. Let’s go back a couple of years ago when I was up in Minneapolis helping out with the filming of Color Me Obsessed. As I always do when I’m in my favorite city, I made a stop at Treehouse Records, one of my favorite record stores in the world.
Sure, there are tons of stores with a bigger selection, or even more attuned to my personal taste. This store, though, is not only a Minneapolis institution, but a historic landmark for those who are...um, obsessed with The Replacements.
It was here during the store’s days as Oar Folkjokeupus that Paul Westerberg famously handed employee Peter Jesperson a demo tape that led to not only him becoming their manager but the creation of their label, Twin Tone Records. Located right across the street from the landmark CC Club, Oar Folk was famous for being a hangout before and after a few drinks at the CC. 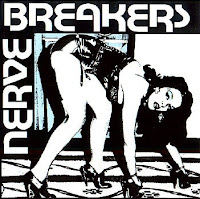 So on this fateful day, I was wandering around the store picking up odds and ends when I saw a magazine that featured The Kinks on the cover. Ok, I’ll take that, too, but it ultimately wasn’t the Kinks featured that inspired today’s selection. No, this magazine, Ugly Things, featured a twenty-page article on a band that I never heard of before this day.
The Nervebreakers were a late 70’s/early 80’s Dallas-based punk band whose story is full of fascinating tidbits. They opened for the infamous Dallas appearance of The Sex Pistols. A similar slot opening for The Clash led to that band stealing their “The Good, The Bad, and the Ugly” entrance music. They also spent time during this period working as Roky Erickson’s backup band, which led to a live album that’s been reissued seemingly dozens of times.
All of these tidbits, plus the lengthy yet entertaining recall of the band’s history, created a new fan thirty years after their initial breakup. I had to obtain any and all recordings I could possibly find, which includes a number of singles and one-off album appearances...plus their only full-length album, We Want Everything, which wasn’t released until 13 years after their breakup.
The fact that it took so long for this album’s release is a shame, as it proudly stands next to any punk or punk-psych record of that period. “My Girlfriend Is a Rock” and “Girls Girls Girls Gilrs Girls” should have been worldwide smashes, and there’s no drop in quality throughout the rest of the album, which also includes a country-punk cover of George Jones’ “The Race Is On”.
Since my discovery, the band has reunited for occasional shows, and earlier this year put out a new compilation of singles and other sessions Hijack the Radio. Leader T. Tex Edwards, besides being the greatest music tweeter in the world, has had a number of other projects over the years, the highlights of which have recently been compiled on Intexicated! But it now, along with everything else associated with the band!
Email Post
Labels: color me obsessed nervebreakers scott hudson t. tex edwards treehouse records walking rock alphabet