While it is a warm day, I almost refrained from getting out on my walk. Gusty winds made the fifty degree temps feel much, much colder. My mid-afternoon, though, these winds had quieted down to a cool breeze so I made my way out the door.
Although there are a number of albums in the “Y” section of my library, this was one of those days where the choice was obvious. You may recall in previous posts that I spent a good portion of the 90’s following the alt-country/Americana/No Depression movement. By the dawn of the new century, though, this genre was starting to dry up. The great runs of Son Volt and Steve Earle albums had slowed down; Whiskeytown was dissolving due to whatever chaos and insanity was running in leader Ryan Adams’ brain. There were still some great bands and songwriters, but few of them seemed as fresh as what had come before. 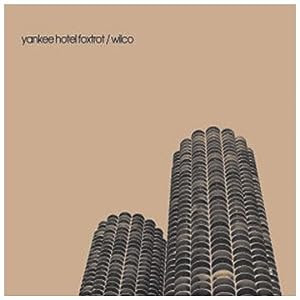 One band who was successfully adapting to the changing landscape was Wilco. Originally considered the second-tier spinoff of Uncle Tupelo, Jeff Tweedy’s band had by now eclipsed Jay Farrar’s Son Volt by moving away from the country-rock of their first two albums (A.M. and Being There). Their third album, Summerteeth, had more in common with the Beach Boys than The Byrds, so expectations for album number four were high.
The story of the resulting album, Yankee Hotel Foxtrot, has been well-documented in print and video, particularly in the I Am Trying to Break Your Heart documentary. Besides the personnel changes that saw the departures of drummer Ken Coomer and multi-instrumentalist/co-producer Jay Bennett, the resulting album was initially turned down by their record company, which delayed its release for almost a full year.
When it was finally released in April, 2002, the album’s success showed that not only was their original record company was incorrect in their sales assessment, it also proved that pre-release leaking and downloading were not necessarily the reason for the music industry’s declining sales. Wilco had defied record company protocol by giving a blind eye to MP3 sharing and also by streaming it on their website months before it’s release. In fact, not only was the actual album available online, but hours of alternate versions, demos, and different mixes.
As for the actual album, it’s hard not to agree that it is the band’s masterpiece. Their use of “found” sounds, feedback, and other forms of audio noise and technology sort of makes them an “American Radiohead”, but at its heart Yankee Hotel Foxtrot is a natural pop progression from Summerteeth. Outside of a few little touches, the orchestrated noise is really only present on a couple of songs (“I Am Trying to Break Your Heart”, “Ashes of American Flags”, “Reservations”), leaving the rest of the album as “normal” acoustic-based pop songs. How is it possible that Warner Brothers thought songs such as “Kamera”, “Heavy Metal Drummer” and “I’m the Man Who Loves You” were noncommercial?
Email Post
Labels: scott hudson walking rock alphabet Wilco