Here we are at the end of this silly walking/writing exercise. Or at least the first phase of it, as I need to motivate myself to carry on. Not just the physical exercise, either, as this project is as much to also engage the brain matter. I know I’m a shit writer, but I have seen a bit of improvement over the past few weeks.
I began contemplating this last post a few days ago. I had this desire to go out with a bang. Sort of my personal pop shot. I wanted this final post to cause beautiful women to roll around naked in glitter, and for guys to...well, I don’t give a fuck about dudes. I’ve never understood “bro” culture, and never will.
Luckily, the letter “Z” was perfect for this big concluding post. It is one of those letters where I have few choices, but one of those was EXACTLY what I was looking for. A 71-minute album by one of my beloved bands that was an instant classic on its release.
Keep in mind the typical album lengths that I’ve utilized throughout these posts. A good percentage of my picks were in the 30’s, and few others went past the 45-minute mark. But I’ve taken advantage of beautiful weather this week with a couple choices that went past the fifty-minute mark. 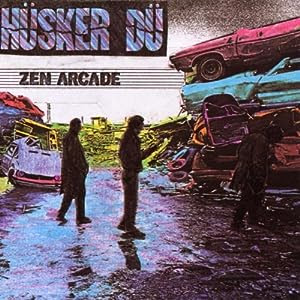 Seventy-one minutes, though, is a big jump over the early 50’s, but as soon as I saw that Husker Du’s Zen Arcade on my list I knew it had this had to be my goal for the day. Initially, I hedged my bets a bit. Knowing that the album concluded with the fourteen-minute “Reoccurring Dreams”, a consolation prize of getting back to my house as this song commenced would still be my walking record.
So I made it out of my front door with the military-style kickoff of Grant Hart’s drums, which were quickly joined by Greg Norton’s bass and the slicing guitar buzz of Bob Mould. “Something I Learned Today” was that initial blast, and I was on my way in a semi-furious pace that never relented.
Seriously, I kept up this speed for the vast majority of the walk. I had initially figured that just by extending the lengthy square that I had previously utilized on one of my longer walks that I’d hit the curvy entrance of my block to that already-mentioned “Reoccurring Dreams”. Nope, I still had three other normal-length tunes at this point so I had to carry on another couple of blocks and then had to circle around MY long block for a second time.
In some respects, it’s fitting that this is the album that not only upped the length of my wandering but also my pace. Zen Arcade was recorded in two marathon sessions during short breaks in the band’s excruciating touring schedule. I’m not exaggerating on the marathons either, as each of these sessions found the band locking themselves in the studio for 24 straight hours. It probably helped, though, that Bob Mould claimed in his autobiography that he laced the studio’s coffee with a big dose of crystal meth!
Zen Arcade shows Husker Du at the peak of their powers, and the fact that it’s a double album with a running story is simply extraordinary. There were no double albums in hardcore, let alone concept albums. But after releasing a seven-inch, an EP, and one full-length album, they went for it.
So what’s the story? Well, it’s not as coherent as Tommy, but in some respects it’s very similar. As their wiki page says, the album “tells the story of a young boy who runs away from an unfulfilling home life, only to find the world outside is even worse”. Besides the ambitious attempt to create a somewhat coherent story, the album finds the band expanding on their sonic template. Many tracks rank as their most melodic to date, and their are plenty of interludes that incorporate psychedelia, folk, and that big hardcore no-no, piano.
Most importantly, this is THE album that captures Husker Du at their most united. There’s no glaring differences between Mould and Hart tunes; there’s no overdubbing of Norton’s bass lines. Almost every track is a first-take, but there’s few bum notes or missed cues. While subsequent albums come close to Zen Arcade’s heights, and both Mould and Hart perfected the ability to write pure pop songs, Zen Arcade remains the true classic of the band’s history.
With the final album of this round completed, it’s now time to once again ask the few who read this drivel to make some suggestions. Like I said, I want to keep on the walking/writing combination, but I’m unsure how to proceed. I’ve thought about repeating the alphabetical selection, but choosing band names instead of albums. I’ve contemplated various shuffle devices, but there’s something to be said about heading out with a set goal that’s created by my choice of the day.
What do you think? If you have any ideas, please leave them in the comments, or shoot me an email.
Email Post
Labels: husker du scott hudson walking rock alphabet zen arcade

grudznick said…
I enjoyed reading about your walking rock stories and how you came to your choices, Mr. Hudson.
8:43 PM